At the Pearl Continental Hotel, in Peshawar, a concrete tower enveloped by flowering gardens, the management has adopted security precautions that have become common in Pakistan’s upscale hospitality industry: razor wire, vehicle barricades, and police crouching in bunkers, fingering machine guns. In June, on a hot weekday morning, Noor Behram arrived at the gate carrying a white plastic shopping bag full of photographs. He had a four-inch black beard and wore a blue shalwar kameez and a flat Chitrali hat. He met me in the lobby. We sat down, and Behram spilled his photos onto a table. Some of the prints were curled and faded. For the past seven years, he said, he has driven around North Waziristan on a small red Honda motorcycle, visiting the sites of American drone missile strikes as soon after an attack as possible.

Behram is a journalist from North Waziristan, in northwestern Pakistan, and also works as a private investigator. He has been documenting the drone attacks for the Foundation for Fundamental Rights, a Pakistani nonprofit that is seeking redress for civilian casualties. In the beginning, he said, he had no training and only a cheap camera. I picked up a photo that showed Behram outdoors, in a mountainous area, holding up a shredded piece of women’s underwear. He said it was taken during his first investigation, in June, 2007, after an aerial attack on a training camp. American and Pakistani newspapers reported at the time that drone missiles had killed Al Qaeda-linked militants. There were women nearby as well. Although he was unable to photograph the victims’ bodies, he said, “I found charred, torn women’s clothing—that was the evidence.”

Since then, he went on, he has photographed about a hundred other sites in North Waziristan, creating a partial record of the dead, the wounded, and their detritus. Many of the faces before us were young. Behram said he learned from conversations with editors and other journalists that if a drone missile killed an innocent adult male civilian, such as a vegetable vender or a fruit seller, the victim’s long hair and beard would be enough to stereotype him as a militant. So he decided to focus on children. 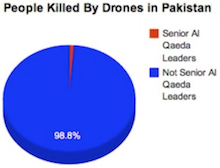