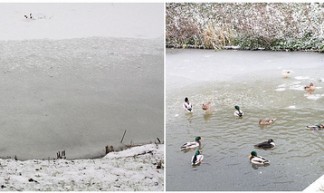 The bitter winter afflicting much of the Northern Hemisphere is only the start of a global trend towards cooler weather that is likely to last for 20 or 30 years, say some of the world’s most eminent climate scientists. Their predictions – based on an analysis of natural cycles in water temperatures in the Pacific and Atlantic oceans – challenge some of the global warming orthodoxy’s most deeply cherished beliefs, such as the claim that the North Pole will be free of ice in summer by 2013.

According to the US National Snow and Ice Data Centre in Colorado, Arctic summer sea ice has increased by 409,000 square miles, or 26 per cent, since 2007 – and even the most committed global warming activists do not dispute this.

The scientists’ predictions also undermine the standard climate computer models, which assert that the warming of the Earth since 1900 has been driven solely by man-made greenhouse gas emissions and will continue as long as carbon dioxide levels rise. [Noot HL: Dat is niet juist. Het VN-klimaatpanel heeft beweerd dat de opwarming die sinds 1950 heeft plaatsgevonden voor meer dan de helft door antropogeen CO2 is veroorzaakt, met een zekerheid van meer dan 90%. Wetenschappelijk gezien is dat natuurlijk onzin, maar dat is nu eenmaal de formulering die het IPCC heeft gekozen.] They say that their research shows that much of the warming was caused by oceanic cycles when they were in a ‘warm mode’ as opposed to the present ‘cold mode’. This challenge to the widespread view that the planet is on the brink of an irreversible catastrophe is all the greater because the scientists could never be described as global warming ‘deniers’ or sceptics.

Last week, as Britain froze, Climate Change Secretary Ed Miliband maintained in a parliamentary answer that the science of global warming was ‘settled’.

Among the most prominent of the scientists is Professor Mojib Latif, a leading member of the UN’s Intergovernmental Panel on Climate Change (IPCC), which has been pushing the issue of man-made global warming on to the international political agenda since it was formed 22 years ago. Prof Latif, who leads a research team at the renowned Leibniz Institute at Germany’s Kiel University, has developed new methods for measuring ocean temperatures 3,000ft beneath the surface, where the cooling and warming cycles start. He and his colleagues predicted the new cooling trend in a paper published in 2008 and warned of it again at an IPCC conference in Geneva last September.

Last night he told The Mail on Sunday: ‘A significant share of the warming we saw from 1980 to 2000 and at earlier periods in the 20th Century was due to these cycles – perhaps as much as 50 per cent. ‘They have now gone into reverse, so winters like this one will become much more likely. Summers will also probably be cooler, and all this may well last two decades or longer. [Noot HL: Eerder sprak Latif van één decennium.] ‘The extreme retreats that we have seen in glaciers and sea ice will come to a halt. For the time being, global warming has paused, and there may well be some cooling.’

As Europe, Asia and North America froze last week, conventional wisdom insisted that this was merely a ‘blip’ of no long-term significance. Though record lows were experienced as far south as Cuba, where the daily maximum on beaches normally used for winter bathing was just 4.5C, the BBC assured viewers that the big chill was merely short-term ‘weather’ that had nothing to do with ‘climate’, which was still warming. The work of Prof Latif and the other scientists refutes that view.