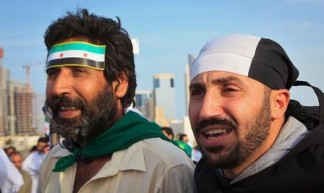 Russia has been roundly criticised for vetoing a draft UN Security Council resolution aimed at stopping the violence in Syria and ousting President Bashar al-Assad. Moscow is reluctant to give up on the al-Assad regime for the moment: it has a direct interest in the survival of the regime, which buys its arms and provides a naval base; it is strongly opposed to Western-led interventions, on principle; it believes that Arab revolutions are likely to lead to takeovers by Islamic fundamentalists; and it is still fuming that, after it refrained from vetoing UN Security Council resolution 1973 on Libya – about the protection of civilians – the West abused the resolution by using it to justify regime change.

However, Russian diplomats concede that change is inevitable if the violence in Syria is to be contained. Russia wants a managed transition that preserves its influence. The draft UNSC resolution called for the confinement of the Syrian army to barracks and endorsed the Arab League plan for al-Assad to hand over power to his vice president prior to the holding of elections. Russian diplomats are right to say that such a resolution would have been unenforceable and, if implemented, would have led to the sudden collapse of the Syrian government without a credible alternative to take its place. Anarchy could have ensued. The Kremlin may be playing realpolitik and taking pride in blocking the West, but it has a point.

Western leaders have been sincere in expressing revulsion at the continued crackdown by the Syrian military upon largely peaceful protestors. But their diplomacy has been ineffective. Preferring to issue ultimatums from afar, they have given up on dialogue with the Syrian regime when there is no other viable alternative.

A number of diplomatic rules have been ignored by Western governments in Syria. First, never rule out force publicly even if you have done so privately. The numbers killed in Syria are beginning to dwarf those murdered by the Gaddafi regime prior to the NATO intervention in Libya. The brave political decision by European leaders to come to the aid of the Libyan people should have reverberated throughout the region, sending a warning to Syria and other dictatorships in the region. The message should have been clear: nothing is off the table if you murder your own people. Instead, from almost the moment the protests in Syria began, Western leaders fell over themselves to tell Syrian President Bashar al-Assad that he had nothing to fear, since military intervention was simply unthinkable no matter what he did. Western diplomats say that this was necessary in order to secure Chinese and Russian support at the United Nations. That is correct, but such assurances could have been provided discreetly, while the regime in Damascus was left to guess about NATO’s real intentions.

Second, the main function of an embassy is to act as a liaison with a host government, even one as odious as that in Damascus. The closing of Western embassies has had little effect upon regime behaviour but has blocked channels of communication. Despite ruling out military intervention or the provision of assistance to defectors from Syria’s armed forces, Western diplomats have not managed to do much about Syria other than criticise the violence and call on President al-Assad to stand down.

Western leaders have painted themselves into a corner. They have misread the situation on two counts: firstly, they have assumed that the removal of al-Assad is critical towards ending the violence and issued ultimatums to that end. Secondly, they have also over-estimated the weakness of the Syrian regime and the willingness of the military to turn upon its leaders. The President of Syria is no Gaddafi – power is distributed more horizontally among the elite in Syria, and the President’s control over the security services is by no means absolute. The removal of al-Assad by itself would not solve much unless accompanied by a broader commitment to reform. Syrian military leaders have now gone too far to turn back. As in Spain at the end of the Franco dictatorship, they will want assurances that a transition will not mean prison or worse for them and their supporters. Moreover, they are not being defeated – on the contrary, defections have so far been minimal and they believe that they have groups such as the Syrian Free Army on the back foot.

Third, do not encourage regime change without any concept of how, and with what means, such a revolution might come about. The West should have learned this lesson after the slaughter of Iraqi Shia rebels who rose up against Saddam Hussein in 1991 – when the insurgents received nothing more than words of support despite expectations of financial aid and military equipment. Also, if political and economic sanctions are to be the exclusive means of weakening the Syrian regime, it is essential that neighbouring countries are on-side. Here the West has put too much faith in the Arab League. The Arab League may have become more vocal, supported by countries such as Saudi Arabia that have long resented Syria’s ties with Iran, but it remains incapable of enforcing its resolutions.

The Syrian government knows that Arab League resolutions are toothless, and that they have supporters in key neighbouring Arab countries, notably Prime Minister Nouri al-Maliki in Baghdad and leading figures in the Lebanese government. Economic sanctions may yet prove to be fatal, but like Chinese water torture, they will need time to take effect. Iran is increasing its support while Turkey, after a brief period of sabre-rattling, has gone cool on the idea of military intervention. Damascus also knows that calls by the Qatari government for intervention by an Arab peacekeeping force will come to nothing.

The West should try to rein in efforts by Gulf countries to arm a range of insurgent groups, many of which are deeply mistrusted by important minority groups such as Syria’s Kurds and could do significant damage to the credibility of the opposition movement. Syria badly needs a credible shadow government to negotiate with external parties. Until one emerges, Western diplomats should discourage the distribution of weapons to disparate groups feuding for leadership.

Given the enduring strength and resistance of the Syrian regime, and the lack of any immediate military means to weaken it, it is disappointing that Western countries have all but cut off diplomatic contacts with Damascus. The West should re-start diplomatic dialogue with Syria without pre-conditions. In the end an unsavoury deal such as that made with President Ali Abdullah Saleh of Yemen – granting him immunity from prosecution – may be appropriate for key members of the Syrian elite. Western leaders need to grapple with what an acceptable deal could look like. Issuing statements that condemn a regime is easy; but it is tough diplomatic negotiations with the government in Damascus that can best help the Syrian people.

However, there are limits to the role Western diplomacy can play. Although the West can embark on a supportive dialogue, it is now impossible for the West to play a leading role as an intermediary in the conflict. A trusted interlocutor is urgently required to negotiate a credible transition in Syria. Such leadership cannot come from Europe, the United States, the Arab League, or Russia – none of whom are trusted by all sides. UN Secretary General Ban Ki-moon has been content to sit on the side-lines, choosing not to deploy his ‘good offices’ in the manner of his more courageous predecessors. It is time to appoint a UN Special Representative to engage with the regime and opposition alike. Even if his or her proposals are ultimately rejected by Moscow or Washington, some options are better than none.