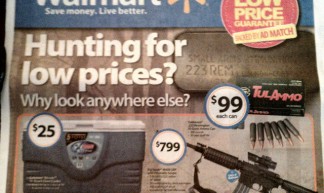 This obvious set of facts:

See the differences? See the statistically significant correlation between homicide by firearms and ownership of firearms? See the massive difference between the United States and other developed countries?

If that were the case, the rates of violence between the United States and comparable countries would be, well, comparable. Heck, violence rates all over the world would be roughly at the same rate. There is nothing “natural” about violence. There is nothing genetic about it. It is not universal. To state that violence is universal and part of human nature fails to explain the scatterplot above.

Rationalization #2: If the killers had not used guns, they would have used something else (follows a long list of potential weapons).

Except, they did not, did they. These killer had access to these alternative weapons all along. So why did they pick guns? R#2 does not explain the choice of guns in the first place. The reason they picked guns was that guns are available relatively easily. They are also lethally effective (and a lot of  people pointed out that the Chinese attacker went after the same number of children with a knife and none of them died). And the kind of guns these killers chose were those that would provide them with great and easy means of piling up a solid body count.

Also, no one knows whether the killers would have turned to other weapons. had guns not been available. It is pure speculation.

Actually, we may suspect that they would not. When other societies removed weapons, the number of homicides drops to low levels. Again, just look at the scatterplot above.

To be fair though, the scatterplot below shows what percentage of homicides were committed with firearms. The correlation becomes weaker, but still holds with three outliers.

In other words. countries where forearms ownerships is lower than the US are not full of murderers using other weapons available to them.

Rationalization #3: It’s because of diversity. All these other countries have much more racial and ethnic homogeneity than the United States.

Note that no evidence is ever offered of that claim. But let’s accept it for the sake of argument. The majority of homicides in the US are committedwithin racial and ethnic groups, not across racial and ethnic lines. If diversity was the issue, we would be discussing epidemics of cross-racial / cross-ethnic violence. That is just not the case. And in the vast majority of the killings under discussion, it is usually white killers / white victims. Diversity has nothing to do with it. Illegal immigration has nothing to do with it. When was the last time such killings were committed by undocumented immigrants?

As a general rule, when people invoke “diversity” as the independent variable (never operationalized as a variable, but amorphously invoked nonetheless), it is the PC way of making a racist argument (it’s because of the non-white people that other European countries don’t have) without being called racist. And it’s wrong every single time.

Rationalization #4: the killers are mentally ill, therefore, no gun regulation will do anything.

This one often comes even before we even know anything about the killers but all of a sudden, everyone becomes capable of psychiatric diagnosis. Again, this one does not explain the scatterplot above. One would still be left having to explain why the United States has a higher rate of mental illness. But then, one would still have not explained the link mental illness → gun violence.

This rationalization also assumes that mental illness is an objective category completely disembedded from culture. As I have argued before, mental illness does not exist separate from culture. As Howard Becker showed us a long time ago, a category like “mentally ill” is one that is socially constructed through a variety of social processes having to do with specific professions and producing results such as the DSM. The DSM is not an objective categorization of symptoms and conditions. It is influenced by – and influences – our culture. Once socially produced, the designation of “mentally ill” is then applied as a label to a series of observable behavior that violate norms.

If one wanted to invoke mental illness as an explanation for the shootings, one would still need to explain why the person decided to get guns and shoot others as opposed to, say, run naked in the streets, a behavior that would also get the person defined as mentally ill. And one would still have to explain why mentally ill people do not pick killing with guns as the behavior expression of their mental illness in other countries.

The truth is that mentally ill people are just as influenced by the culture as the rest of us. They are just as socialized in a culture that provides scripts regarding masculinity, violence, power and, yes, guns. It is culture that makes available the idea that one’s masculine anger is to be appeased to murder suicide by gun.

And then, once these rationalizations are in place, solutions are offered:

Based on the scatterplot above, this one should have been laughed out of town a long time ago.

I know this one sounds stupid but it has been trotted out, so, keeping in mind the scatterplot above, consider this:

And if you look at religiosity within the US, you will find all sorts of behavior (like murder) correlated with high religiosity:

So, overall, the data is pretty clear and so are the policy implications. And I would just like to add one more thing:

Now, you will note that the arguments on masculinity, white privilege, mental illness and health care in general, inequality and gun policy are all arguments that we are told to not make because it is insensitive. Then, ask yourselves, who benefits when these issues are not discussed and problems not solved?