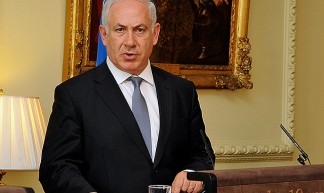 The difference is that ISIS is armed with butcher knives, captured weapons and YouTube, whereas Iran could soon be armed with intercontinental ballistic missiles and nuclear bombs.

Because Iran’s nuclear program would be left largely intact, Iran’s break-out time would be very short — about a year by U.S. assessment, even shorter by Israel’s.

And if — if Iran’s work on advanced centrifuges, faster and faster centrifuges, is not stopped, that break-out time could still be shorter, a lot shorter.

Now I want you to think about that. The foremost sponsor of global terrorism could be weeks away from having enough enriched uranium for an entire arsenal of nuclear weapons and this with full international legitimacy.

And why would a country with a peaceful nuclear program develop intercontinental ballistic missiles, whose sole purpose is to deliver nuclear warheads? You don’t build ICBMs to carry TNT thousands of miles away; you build them for one purpose, to carry nuclear warheads. And Iran is building now ICBMs that the United States says could reach this city in three or four years.

“They’re edging up to the red line,” Netanyahu said. “They haven’t crossed it yet. They’re also building faster centrifuges that would enable them to jump the line, so to speak, at a much faster rate – that is, within a few weeks.”

Iran is continuing with its nuclear program. It has yet to cross the red line I presented at the United Nations, but it is approaching it systematically.

Benjamin Netanyahu claimed that “Iran is getting closer” to his self-determined “red line” of nuclear weapons capability and is “putting itself in a position to cross that line very quickly once it decides to do so.”

… Iran’s capability to enrich uranium must be stopped before next spring or early summer, arguing that by that time the country will be in a position to make a short, perhaps undetectable, sprint to manufacture its first nuclear weapon.

Netanyahu estimated that Iran is a few months away from becoming nuclear. “The time frame isn’t measured in days or weeks, but not in years either.”

Netanyahu said that “international [diplomatic] efforts did not prevent Iran from advancing toward a nuclear bomb, and it may get there sooner than people think.”

“They have enriched enough material now almost for three nuclear bombs,” he said. “They still have to re-enrich it again but that is what they are doing.

Netanyahu responded that Iran has the capability now to make one bomb or they could wait and make several bombs in a year or two.

Netanyahu said he did not know for certain how close Iran was to developing a nuclear weapons capability, but that ‘our experts’ say Iran was probably only one or two years away and that was why they wanted open ended negotiations.

Iraq, about which he claimed there was “no question” that it was “advancing towards to the development of nuclear weapons.”

Netanyahu stated that if Iran “were to acquire nuclear weapons, this could presage catastrophic consequences, not only for my country, and not only for the Middle East, but for all mankind,” and claimed that “the deadline for attaining this goal is getting extremely close.”

Iran is 3-5 years away from nuclear capability

Within three to five years, we can assume that Iran will become autonomous in its ability to develop and produce a nuclear bomb, without having to import either the technology or the material,

Israeli parliamentarian Benjamin Netanyahu tells his colleagues that Iran is 3 to 5 years from being able to produce a nuclear weapon – and that the threat had to be “uprooted by an international front headed by the US.”