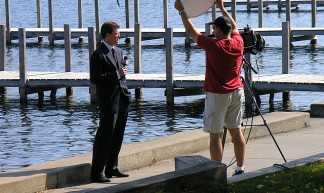 BRIEF, COLUMN - (this text started as an email to a Dutch employee of the national broadcast service NOS)

Yesterday you felt it tweet-worthy that Russia Today TV had cut off a guest who used the platform he was given not to discuss the Bradley Manning trail but instead staged a protest against the horrible LGBT-rights situation in Russia. This incident was to you ‘proof’ that RT could not be trusted as a good information source in other things. As a reference you picked the Dutch newspaper ‘De Telegraaf’. This, in my view, was a rather unfortunate choice since this newspaper has itself a long and sordid history of collaborating with the German occupation, misinforming of misrepresenting world events and generally being a publication that only cares about human rights when it suits their political agenda. All in the tradition of FOX-news and the Daily Mail.

At OHM2013 I talked about implications of accelerating tech, some ways to understand the various crisis we’re in right now and some questions we can ask about the strange things our governments seem to be up to these days.

I was critical of most western ‘mainstream’ media because they see quite incapable of asking basic questions such as: “why are we putting Bradley Manning on trial and not the helicopter-gunner who shot up over a dozen civilians including children?” Shooting at children with an anti-tank gun and then lying about it to the world is probably a war-crime, certainly something worth digging into in the context of a war that itself has been started based on lies.

After more than ten years the organisation you work for seems quite incapable to even come up with the proper questions relating to the greatest western war-crimes since 1945 (let alone have the guts to ask them). This despite the fact that you are paid for, by the public, to inform that public about the world. This so we can make better-informed choices when we go to vote or protest the people we voted for last time.

It is the kind of simple question that RT.com *does* ask (or allows their guests to ask) on-air. And for this reason I find them a good source of information/insight with respect to Western policies and activities. And when discussing getting good information on these policies I was asked what I considered a good source and so I said: RT.

I do not *prefer* using a Russian-state-funded TV channel to get my info about what the West gets up to in Asia or North Africa but the utter failure of organisations like the NOS (and BBC, etc, etc) leaves me with a distinct lack of options. Instead of critising RT for not being the news organisation you would like them to be you really should look for solutions closer to home.

So for somebody like yourself, employed by an organisation that is supposed to ask tough questions but does not (for whatever reason) to use that single incident using that particular source to ‘prove’ a point is, to be quite frank, laughable and sad. Understanding that Twitter is not good for nuance my reaction to your tweet was therefore in kind.

Before and during OHM2013 I did several radio interviews, including with some of your colleagues. Every time I was asked if the hacker-community was a bunch of (cyber)criminals. This despite the fact that in 24 years of Dutch hacker events not a single crime has been reported. I considered to reply with the return question if all journalists where corporatist-warmongering-whores. Obviously this would be somewhat hype as well but at least it would be hype with *some* basis in fact.

During the interviews your fellow journalists seemed to be most baffled by the fast that Julian Assange was happy to spend a full hour talking to our community while they were getting no responses at all to their repeated interview requests. I hope the above shines some light on this situation.

You state your job is listening. I would suggest it is also asking questions and providing context. Taking half a answer out of a 45 min lecture seems to be neither to me.

So about the listening (and asking questions); What is your view on the lack of questions being asked about proven NATO war-crimes and the current war on whistle-blowers & journalists? Would you ask the question:

“Why is Manning in prison, after being tortured (according to the UN), for informing us about war-crimes while the perpetrators of said war-crimes are free to fly/command more Apache helicopters?”

And if not, why not?

Given that my taxes pay your salary and our taxes pay for the bullets in those helicopters I suggest pursuing these kinds of questions (on live TV if possible) might be a better use of your time than tweeting about the possible lack of journalistic integrity of a foreign TV channel. And then some of us might even start referring to you as a ‘journalist’ (a title that one needs to earn, just as ‘hacker’), instead of NOS-employee.

I look forward to hearing your views on these matters. Feel free to forward this mail (without edits of course, you would not want to look like a Russian censorist).