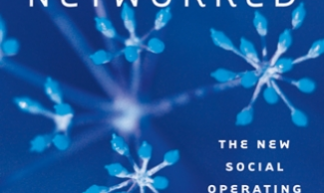 With Networked: The New Social Operating System, Lee Rainie and Barry Wellman offer a very readable introduction to networks and their social consequences. This is a book that aims to reach a larger audience beyond academic walls.

So, even though it extensively relies on research (quite a lot from Pew, unsurprisingly), it is not a tedious read at all as the data alternate with narratives and stories that facilitate comprehension. At the same time, the book is not full of jargon. It also seems that this book aims to convey the message that the sky is not falling because we are spending more time on Facebook and other social networking platforms.

No, we have not stop interacting face-to-face with each other (or should I write f2f, as the cool kids do). No, we are not bowling alone. No, we are turning into sociopathic recluse.

What the book explores is all the different ways in which social networking (and related technologies) have woven their way into our lives and reorganized and re-shaped some aspect of them, but not in the socially-disintegrating ways that the usual prophets of doom have been warning us against.

As a result, the book conveys a relatively optimistic perspective on networks without being totally on the cyber-utopian side. There is not much in the book about the “dark side” of networks. That is Evgeny Morozov‘s turf.

I actually think both books should be read in parallel: where Rainie and Wellman are more micro and optimistic, Morozov is more macro and critical. In all, there is not much in the book that will surprise those of us who read regularly on networks (or are already familiar with Wellman’s work) but we are not really the target audience.

This is a book that is perfectly readable for undergraduate students and the general public and I think it is a nice piece of public sociology that demonstrates what sociology can do and tell on current topics. At the same time, it is rigorously researched (tons of end notes and sources), which is important because one of the points that Rainie and Wellman make is that a great deal of the doomsday scenarios on social networking are based on not much in terms of data. Very often, it is just columnists fears.

As much as the book does not rely on academic and technical jargon, it does revolve around a few concepts: networked individualism, the triple revolution, the social operating system.

“..the story of the new social operating system we call “networked individualism” in contrast to the longstanding operating system formed around large hierarchical bureaucracies and small, densely knit groups such as households, communities, and workgroups. We call networked individualism an “operating system” because it describes the ways in which people connect, communicate, and exchange information. We also use the phrase because it underlines the fact that societies— like computer systems— have networked structures that provide opportunities and constraints, rules and procedures. The phrase echoes the reality of today’s technology: Most people play and work using computers and mobile devices that run on operating systems. Like most computer operating systems and all mobile systems, the social network operating system is personal— the individual is at the autonomous center just as she is reaching out from her computer; multiuser— people are interacting with numerous diverse others; multitasking— people are doing several things; and multithreaded— they are doing them more or less simultaneously.” (Loc 341)

[All emphases mine. I read this in kindle edition and all the endnotes were turned into notes at the end of each chapter, which messed up the page numbers and therefore, kindle only identifies locations.]