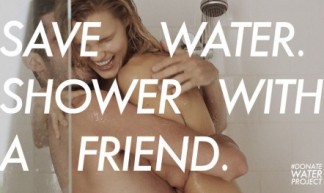 Bridge the gap between charitable foundations and younger people is the goal of The Envolve Project. “Using modern imagery for new media that acts as a call to arms for humanitarian and environmental causes” is their statement on Facebook.

These two video’s, flagged with the hashtag #donatewaterproject, is their first attempt.

Above is a simple message: Save water, shower with a friend.
There is another way to save water with a shower. Why not combine these two ideas?

Of course, I embrace the idea of reaching young audiences through modern media. But it is not really new, it’s part of the success of channels like YouTube and Instagram.
Besides that, strategic thinking from the channel shouldn’t be the basis. Never. It’s the message what comes first. And precisely that message is very thin in these two video’s. It isn’t sustainable and solid, it is liquid and slips away.

Another claim from the project: “The Envolve Project promises to never use negative imagery to guilt and shame viewers into donating. We feel that this tactic is classless and counter-productive.”
That’s exactly my problem with the second video. The used of the term ‘Dirty Girl’ is risky and can be interpreted negatively.

My criticism above is mild. I could have used the term objectification. See their FB page for more.