Although I was born in Lebanon, my family is Palestinian. And like the majority of Palestinians who became exiles in Lebanon after 1948, they were never able to obtain Lebanese identity cards. It was one way of discouraging them from integrating into the Lebanese situation.(Bron: Tate Modern).

When I went to London in 1975 for what was meant to be a brief visit, I got stranded there because the war broke out in Lebanon, and that created a kind of dislocation, [which] manifests itself in my work.

Light Sentence, 1992.
You know, I’m always surprised when, years after I make a work, someone comes up and says, “Oh, this means this to me.” Just recently I was talking about Light Sentence in kind of negative terms… You know, it reminds you of the architecture of tower blocs in the suburbs of big cities, uniform and regimented architecture… But someone responded, “Oh, it’s funny because when I looked at the shadows, it gave me a lot of hope.” Wonderful! Absolutely amazing! (Bron: The Talks).

Measures of Distance, 1988.
Although the main thing that comes across is a very close and emotional relationship between mother and daughter, it also speaks of exile, displacement, disorientation and a tremendous sense of loss as a result of the separation caused by war. In this work I was also trying to go against the fixed identity that is usually implied in the stereotype of Arab woman as passive, mother as non-sexual being  the work is constructed visually in such a way that every frame speaks of literal closeness and implied distance. (Bron: Tate Moderrn).

Homebound, 2000.
I called it home bound because I see it as a work that shatters notions of wholesomeness. The home, the domain where the feminine resides is supposed to be about nurturing, giving, loving or whatever therefore I often like to introduce a physical or a psychological disturbance to contradict those notions. (Bron: Lezing, University of Edinurgh, design & digital media). 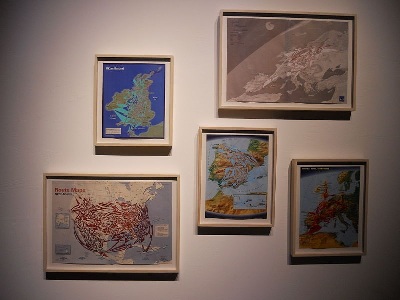 Undercurrent (red), 2008.
The centre square that disperses into a surrounding, circular maze of blood red, vein-like curlicues, invites the viewer onto the carpet: but there’s a catch of course, as the outer border of the ‘fabric’ is protected by 60 or more, 15-watt light bulbs that increase and decrease in subtle power surges, as if the piece were breathing and potentially calming or unsettling the viewer. 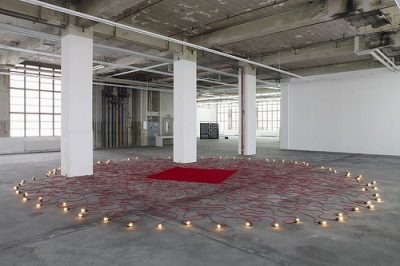 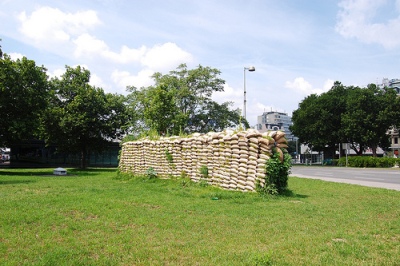 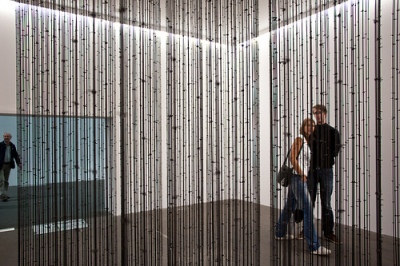 I’m often asked the same question: What in your work comes from your own culture? As if I have a recipe and I can actually isolate the Arab ingredient, the woman ingredient, the Palestinian ingredient. People often expect tidy definitions of otherness, as if identity is something fixed and easily definable.
(…)
If you come from an embattled background there is often an expectation that your work should somehow articulate the struggle or represent the voice of the people. That’s a tall order really. I find myself often wanting to contradict those expectations.