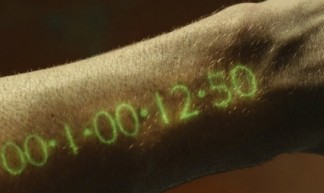 I watched this film, scifi fan that I am:

The movie was directed by Andrew Niccol who also directed Gattaca (which I really loved) and Lord of War (ditto). Now, the main plot is rather stupid and the main characters were poorly cast, in my view, but, as usual, I got more interested in the social background underlying the story.

For those of you who have not seen it, the story takes place in a dystopian future (aren’t they all?) where the dominant currency is time. People are genetically programmed to grow up until they reach 25, then, a clock embedded their arms starts and they have one year to live unless they can get extra years through labor, gambling, prostitution, or financial dealings. Everything is bought and paid for in time (minutes, hours, days, etc.). The whole language reflects the prevalence of time. When your clock gets down to zero, you just (literally) drop dead.

This society is highly stratified in a very Wallersteinian way. Financial investors are at the top of the social ladder and they live in wealthy (gated and highly secured) time zones that resemble Wallerstein’s core areas. There are middle time zones (the semi-periphery) and the ghettos (the periphery) where people are fully precarized in terms of time. They work for a few extra days, take out loans that deplete their clocks. The whole time system (financial system) is controlled by very large corporation, controlled by time-financiers who continuously extract time-value from the less wealthy time-zones (through labor, loans and control of the costs of living… when they need a time boost, the wealthy – in New Greenwich, a major core time zone – bump up the cost of living in the ghetto which extracts more time from the poor, that is transferred to the wealthy.

This translates in different behavior. In the ghetto, people are constantly checking their clock and rushing and running everywhere. That is how the main character gets spotted as “different” when he crosses into wealthier time zones. In the wealthy time zones, people move slowly. They have time.

There is more than enough time for everybody but the wealthy want to live forever, so, in that zero-time game, someone has to die for that to happen. And so, while the poor live highly precarized lives, doing anything to live a few more days, including engaging in fights through organized criminal groups where the goal of the fight is to deplete the other guy’s clock, the wealthy live lives surrounded by luxury but also lots of bodyguards in order to avoid the only deaths they can expect, through crime or their own stupidity (accidents).

In this society, law enforcement takes the form of poorly paid (based on a limited per diem allotment of time) time-keepers who keep track of time and maintain the stratification system. They are what Guy Standing would call the salariat, ideologically aligned with the global time elite, and making sure the precariat in the ghetto does not steal someone’s time even though they are economically closer to the precariat.

As I mentioned, the rest of the film is pretty much either garbage (the rich have it hard too!) or teenage nonsense (the bad boy from the ghetto and the poor little rich girl fall for each other and turn into Bonnie and Clyde 2.0). Apart from that, I think it is definitely meant as a metaphor for our times.