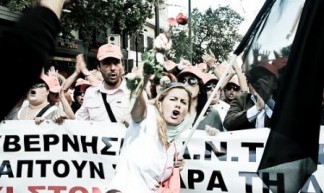 The German idea of sending Athens a ‘budget commissioner’ was daft. Berlin itself could not tolerate such interference in its fiscal sovereignty (the constitutional court would never allow it). But to restrict such budgetary oversight to Greece alone would be disdainful and a political non-starter. The idea predictably caused outrage in Greece. Chancellor Angela Merkel has quietly dropped the proposal but the underlying problem persists: Greece’s donors – not only Germany but also other EU governments and the IMF, no longer trust Greek politicians to turn their country around.

Greece desperately needs a deal on a new bail-out package before March 20th when €14.4 billion in debt repayments are due. The IMF and eurozone governments insist that new money will only be forthcoming if there is a realistic prospect of Greek debt becoming sustainable in the foreseeable future. The IMF says that ‘sustainable’ would mean a debt level of 120 per cent of GDP by 2020 – although most economists think that 60-80 per cent is the most that a weak economy like Greece could cope with.

Even to reduce the debt level to 120 per cent from the current 160 would require a deep cut in existing debt, more fiscal austerity, lots of further outside help and a return to economic growth. Media attention has focused on the debt restructuring talks between Athens and it private creditors. But for Greece’s future prospects, the question of whether bond holders get 3.8 per cent or 4 per cent interest on their restructured portfolios is insignificant compared with the much bigger question of whether and when Greece emerges from its devastating recession.

There is now broad agreement among eurozone donors and the IMF that Greece will not be able to squeeze more revenue out of an economy that is in its fourth year of recession. The IMF forecasts GDP to fall by a further 3 per cent this year but private sector forecasters, such as the Economist Intelligence Unit, think that the economy may contract at twice this rate. In 2010, Greece went through the most savage austerity programme ever implemented by an OECD country. Yet the budget deficit at the end of 2011 stood at around 10 per cent of GDP, so adding to the already unsustainable level of debt.

The emphasis of Greece’s negotiations with the troika (IMF, ECB and European Commission) has shifted to structural reforms designed to boost growth. The good news is that there is lots of room for improvement: by many measures, Greece is the EU’s least efficient economy. The National Bank of Greece has calculated that a comprehensive reform package could boost the annual growth rate by 1.5 per cent over the medium term, although the OCED thinks an additional 0.5 per cent is more realistic.

The previous government of George Papandreou started making headway in various areas, for example by removing some of the protection enjoyed by truckers, lawyers, pharmacists and 140 other ‘closed shop professions’, by simplifying licensing procedures, making life easier for small businesses or giving workers and their bosses more wiggle room to set pay and conditions in Greece’s over-regulated and union-dominated labour market. Papandreou’s technocrat successor, Lukas Papademos, has continued along those lines.

The bad news is that most of these reforms so far only exist on paper – and even here they are often timid and riddled with loopholes. In many cases, the biggest obstacle to real progress is Greece’s bloated and inefficient state administration. According to an OECD analysis published in December, the central government is simply not capable of designing and implementing the growth-boosting reforms that Greece so desperately needs.

The ILO counts 390,000 civil servants in Greece. But add the 660,000 working for public corporations and other semi-state entities and the number swells to over 1 million – more than one-fifth of the workforce. Even that number may be too low since there are all manner of quasi-civil servants on outsourced or temporary contracts who enjoy similar pay levels and perks as full civil servants.

For many years, public sector salaries had outstripped those in the private sector; before the crisis they were on average 60-70 per cent higher. Public sector workers also enjoyed plenty of extra benefits, in addition to job security. Since the onset of the crisis, labour costs in the public administration, defence and social security have fallen by about 6 per cent, according to Greece’s National Institute of Labour. In some parts of the private economy, such as hotels and restaurants, labour costs have fallen by 30 per cent. And unemployment has predominantly hit the private sector, too. “The real conflict is not between Greece and its donors. It is between the public sector and the rest of the population”, says one Athens think-tanker.

The troika demanded early on that Greece shrink the public sector by only replacing one of five of those retiring. But between early 2010 and mid-2011, the government added 20,000 people to the public sector payroll (which still amounts to 13 per cent of GDP). Now the troika insists that the government get serious about cutting the headcount by up to 150,000 over the next three years.

The December OECD report found that the main problem with Greece’s state administration was not its size but the fact that it adds too little value. There is little sensible policy-making because ministerial bureaucracies do not collect or use data on which to base their policy designs. Moreover, ministries communicate badly with each other, if at all. And even within ministries most departments work in “silos” – they produce rules and regulations without much of an idea how they fit into any broader policy plans. The average Greek ministry has 440 different departments or administrative units. One in five of these do not have any staff other than the head of department and only one in ten have 20 staff or more. The central government alone is spread over 1,500 different buildings.

The OECD also found that civil servants care little if new rules and policies are implemented, monitored and enforced. The result is a state administration that is top-heavy, inflexible, obsessed with process and is basically busy having “a conversation with itself”, as the OECD puts it. Having watched the government’s laboured efforts to improve matters, the OECD now thinks that only a “big bang” reform could give Greece a public administration capable of planning and implementing meaningful change.

Similarly, a white paper that came out of a brainstorming at London Business School last year suggests that in some government areas a completely new start is needed. The most urgent is probably the tax administration. The authors of the white paper (Michael Jacobides , Richard Portes and Dimitri Vayanos) are sceptical whether the cronyism and corruption that pervades local tax offices can ever be tackled. Although the government has told its tax collectors to get tough on evaders (some €60 billion in taxes are outstanding), many have simply failed to heed orders to, for example, conduct audits on big tax debtors. Even former finance ministry officials admit that Greece would probably be better off to abolish the 300 local tax offices because they cost more than they collect. Instead, Greece should set up an independent central tax and social security collection agency.

The white paper suggests similar independent bodies in other areas: buying medicines and equipment for the healthcare sector (here, Greece’s spending per head has been the highest in Europe for many years); public procurement more generally (public contracts amount to 11 per cent of GDP but it takes on average 230 days to award such a contract); a corruption watchdog (although graft appears to be declining, according to Transparency International, one in ten Greeks said they paid a bribe in 2010, with public hospitals and tax inspectors being the most greedy); and a central steering group to supervise structural reform – a proposal also dear to the OECD’s experts.

Such independent bodies could potentially be established quickly and make a noticeable difference. However, the few new bodies that the government has so far set up, such as the privatisation agency and the parliamentary budget office, have been woefully understaffed. And they have encountered much political resistance when trying to carry out their assigned tasks.

Greece’s donors know that there are no quick fixes for the country’s deep-seated malaise. But they no longer trust the political class to carry out a sustained reform programme. Both big parties, Papandreou’s social-democrats (Pasok) and the conservative New Democracy, draw much of their support from public sector workers and other molly-coddled groups that resist change.

The new ‘technocrat’ government will hardly make a difference: Papademos has been given only five months before the next election is due. And unlike Mario Monti in Italy, who was free to fill ministerial posts with experts and other non-political types, Papademos is lumbered with 45 cabinet ministers, most of whom are career politicians from Pasok and New Democracy.

EU politicians now insist that all party leaders must commit to the new troika reform programme beyond the April election. But both Pasok leader Papandreou and New Democracy’s Antonis Samaras are opposing chunks of the troika programme while suggesting that there is an easier way out of the crisis than radical reform.

The negotiations for the new support programme are a good opportunity for a new deal: the troika eases demands for rapid fiscal consolidation and finds additional money for growth-boosting investments, for example from Greece’s €15 billion unspent EU funds or the EIB; Greek political leaders, in turn, get serious about public sector reform and opening up the economy. Ultimately, only the Greek people – not any kind of outside watchdog – can hold the country’s often self-serving politicians to account. To help the Greek people, Greece’s donors must make a bigger effort to improve their image in Greece and explain to the Greeks what needs to be done to put the country on a sustainable growth path.