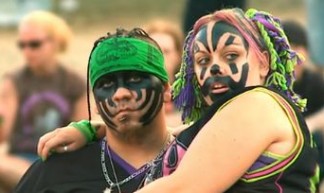 “This ain’t Coachella. It’s not even Bonnaroo.

We’re used to corporate sponsors, patrons staying in hotel rooms. Everybody in America is a winner, on their way up.

But here you have an endless supply of what society calls losers. And they all seem to know it.

This film is as powerful as the great documentaries of Frederick Wiseman and D.A. Pennebaker. It captures a vibe, a feeling, which you don’t find too often in today’s mainstream media”.

This certainly ain’t the beautiful people.

And it’s not all stoners. There are Straight Edge Juggalos, and if one of the talking heads is to be believed, even brain surgeon Juggalos. But I’m guessing those are in the minority.

This is not plastic-surgeried, dieted down to nothing television America. This is the people servicing you, doing those low paying jobs you’ve got contempt for.

But they’re also us.”