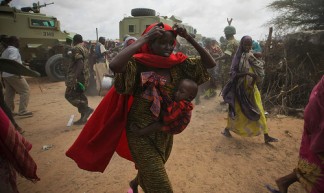 Stealth conflict is, of course, a concept borrowed from Virgil Hawkins, denoting conflicts that are by and large ignored by Western media for a variety of reasons (as opposed to chosen conflicts). As a result, a stealth conflict, when it is not completely ignored, is often treated as impossible to explain, based on ancestral tribal rivalries that are so atavistic as impossible to stop (the underlying colonial racist logic is only thinly veiled here).

The most egregious example of stealt conflict is, of course, the conflict in the DRC but Somalia does not rank far behind. So, it is nice to see at least an attempt at explaining the sequence of events that led to a country without government and torn by conflicting parties:

It is a nice attempt but it is very light on content and quite simplified, which is a common problem when one designs infographics: striking the right balance between overloading the visual with information v. oversimplifying. But it is more attention than this conflict has received. Actually, most of the attention paid to Somalia has been on pirates because they kidnapped Westerners or threatened Western interests.