More than 50 years after a 7,600lb (3,500kg) nuclear bomb was dropped in US waters following a mid-air military collision, the question of whether the missing weapon still poses a threat remains. The bomb was carried by a US B-47 bomber when it collided in midair with an F-86 fighter plane.

Despite being damaged, the B-47 remained airborne and purposefully jettisoned the bomb into the water to reduce the aircraft weight and prevent the bomb exploding during the emergency landing. Following several unsuccessful searches, the bomb was lost somewhere in Wassaw Sound off the shores of Tybee Island.

@6: “Starting on February 6, 1958, the Air Force 2700th Explosive Ordnance Disposal Squadron and 100 Navy personnel equipped with hand held sonar and galvanic drag and cable sweeps mounted a search. On April 16, 1958 the military announced that the search efforts had been unsuccessful.” 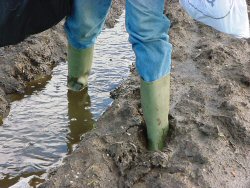 They finally broke out the big gun, the .50 cal with armor-piercing rounds, which are shot at 3000 ft/s.

.50 cal @ 10 ft: even though the water exploded, the ballistics gel was intact. Water made it all the way up to the ceiling. As it was with the previous guns, the bullet round came apart on impact. It lost all of it’s energy within the first 3 ft. You would be safe 14″ underwater at a 23 angle from a .50 cal.

confirmed: you can protect yourself from a bullet by diving underwater. If the shooter were directly overhead, you would probably be safe from most guns at 8 ft. At a 30 degree angle, you would only have to be 3 ft underwater to be safe.

Gevalletje Sum of All Fears dit.