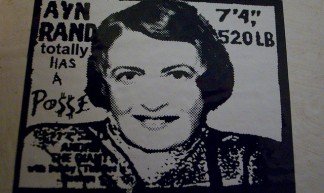 The Vice Presidential candidates had their debate last night, but let’s face it: who cared?  We know all we need to know: Biden is a charismatic, straight-talking leader with a mostly unearned reputation for being a bare-chested mix of Nicolas Cage, Hulk Hogan and a bottle of tequila.  Paul Ryan is a small town boy, fitness nut and liar with a reputation for being a wholesome policy genius, but his numbers never seem to add up.  Plus, Ryan is a devotee of Ayn Rand, the author of Atlas Shrugged.

Have you read Atlas Shrugged?  Me neither; life’s too short for 1,200 pages about how the government is evil, job creators would flourish if only they weren’t hampered by moochers, and that everything your parents taught you about how the strong should defend the weak is bull.  But you know who has read it?  All of Paul Ryan’s staffers; it’s required reading for them.  So when Ryan got the nod as VP pick, I went ahead and read the Cliffs Notes.  If Ayn Rand wrote Spiderman, his Uncle Ben would tell young Peter Parker, “With great power comes great profit.”  What about “great responsibility,” Uncle? What about the needy?  “We don’t want to turn the safety net into a hammock that lulls able-bodied people into lives of dependency and complacency.”

Sorry, that last quote wasn’t a humorous Uncle Ben paraphrase; it was a Paul Ryan quote.

Funny thing is, both Ryan and Rand (and Romney) have a point: too much government is a bad thing. Just ask anyone who owns a comedy theater in the Netherlands and had to put up with a sudden, shocking leap from 6% to 19% in the rate his customers had to pay tax on tickets to his shows. But that ain’t the problem in America now.  America doesn’t need more cutting, it needs more spending.  But what do I know? I’m not a Nobel laureate, like Paul Krugman.

But I digress.  Where was I?  Oh yes, that squeaky-clean liar, Paul Ryan, and his love of Ayn Rand.  Ryan and Rand (though not Romney) are loved by the Tea Party, that small band of nuts that since 2010 has slowly but surely (and with the secret financial help of deep pocketed donors, the Koch Brothers) become the backbone of America’s spineless Republican Party. These are the guys who want America to go back to the days of the original constitution, back in 1789 – before advances in science or medicine or education.  Back when America was a land of freedom! Adventure!  And death by syphilis!  When men were men, and women… were the property of those men.

The Tea Party is always talking about the founding fathers – the men who founded the United States –  but I have a feeling that if they actually met each other, they wouldn’t have that much in common:

WASH:   Yes, that’s… what?  We’re not a Christian nation — it’s right there in the First Amendment to the constitution.  Jesus, that’s the only Amendment we wrote clearly!

WASH:   Why is that an insult?   We were all intellectuals. Have you ever even read a history book?

WASH:   Come on… it’s called “the enlightenment.”  Not the” I-have-seen-the-light!”-enment.

But now that I think of it, maybe they would agree on something: mistrust of President Obama.  The Tea Party is fanatical in their (non-racially motivated!) devotion to hating Obama, and Washington owned slaves.

Pep Rosenfeld is one of the founders and owners of Boom Chicago in Amsterdam. He writes, directs and performs political and non-political comedy, and hosts events like TEDx and PICNIC.  Until 6 November, he can be seen in Boom Chicago’s “My Big Fat American Election.”