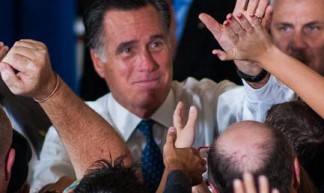 Reading today’s news is tough for Obama supporters like me. Gallup polls have Romney ahead of Obama by two percentage points among likely voters.  Election Day is less than a month away and the idea of a Romney victory gives me the shivers.

So, I thought now is as good a time as any to bring up something about Mitt Romney that nobody is talking about; something that bothers me.

Mitt Romney is a Mormon.

Not just a Mormon, actually. He’s a Mormon Bishop. He baptized people. He hired priests. And, because he’s Mitt Romney, he probably fired them as well.

I don’t have anything against religion. I grew up in a religious family, and, to be honest, I rather enjoy going to church.

The quote above comes from a former Mormon, but I’ve known about this for years.  I grew up in a town that was loaded with Mormons. And while there are many misconceptions about Mormons, this is not one.

If you want a more-clear example, just look at the Mormon capital, Salt Lake City, Utah.  Before 1977 the city was without a major sports team. In 1978 Mormons flipped the blacks-are-okay-switch and what happens? In 1979 The New Orleans Jazz move to Salt Lake City!

And what’s even odder is the reason Mormons had issues with black people.

In the Old Testament Cain and Able are the sons of Adam and Eve. One day -for no real reason- Cain kills Able. Thus, Cain is cursed and he walks the Earth as man’s first murderer.

But, in the Mormon version Cain is- unexplainably- a black man.

There are two reasons why this is weird for me. The first is obvious. Why did Cain randomly kill his brother?  Second, how did Cain end up being black!?  It’s the Garden of Eden, right? Last time I checked, Adam and Eve were the only two people in the Garden of Eden. That was the whole point, right? Tell me, Mormons:  who else could Eve have slept with? The Gardener?

As offensive as it is, the Mormons did change the rule and now black people are welcomed in the church. Bad ideas are sometimes the hardest for Churches to move away from. The Mormon’s deserve credit for changing a crappy rule.

But what about Mitt Romney?

He was thirty one years old and already a priest in 1978. That means that for half of his life he was told not to “associate” with black people because they are the “Descendants of Cain”.  In my opinion, it’d be hard for any man to just flip the switch and completely change the way you think.

Sure he’s rich. Sure he’s out of touch. Yes he’s republican. But, I have to be honest, the whole Mormon -Bishop thing bothers me more.

Mike OT (Descendant of Cain) is an actor, writer and improviser with Boom Chicago in Amsterdam.