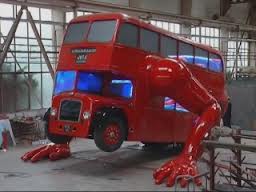 David Cerny, a Czech artist has re-modelled a traditional London double-decker bus into a mechanical sculpture of an athlete doing push-ups to celebrate the Olympic Games opening in the British capital on Friday. The bus is installed outside the Czech Olympic House in London’s Islington neighbourhood.

Cerny bought the 1957 bus from an owner in the Netherlands, attached two huge arms, an electrical engine and a lot of wiring and suspension tools to make it into a piece of art named ‘London Boosted.’