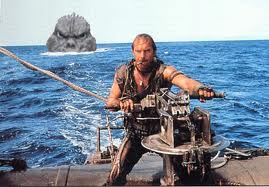 That is wealthy people who would like to continue benefiting from various forms of labor for their enrichment without having to live too close to the laborers. So, first, we all had a good laugh at this:

,,First, he launched Paypal, and then he went on to fund DNA sequencing, commercial space travel and Facebook. Peter Thiel is known for having big ideas and doing amazing things. Now, this self-made billionaire has his sights set on creating sovereign nations that will spring up from the ocean, free from the laws of any country.

Thiel is working closely with the Seasteading Institute to build these startup countries in international waters. He has invested $1.25 million to create what he sees as the next frontier. According to Thiel, a Libertarian, his islands will be instrumental in “experimenting with new ideas for government. These new ideas include a society free of welfare, minimum wages, strict weapons restrictions and rigid building codes.”

I seriously hope this happens so that these libertarians realized how much they depend on socialized things and exploited labor when that is no longer available.

But more seriously but in the same vein, there is this:

,,Brazil has always had its super-rich with extravagant tastes. But booming commodity prices fuelled by Chinese demand, along with some of the world’s biggest offshore oil discoveries, have created an expanding class of wealthy Brazilians. The number of millionaire households in South America’s biggest nation is forecast to treble by 2020 to more than a million. They, in turn, are boosting the international yacht market even as it plummets in the US and Europe.

For the Italian Ferretti Group, one of the world’s leading yacht builders, sales in Brazil represented less than 5 per cent of global sales in 2007, according to Mr Christiansen. This year, Brazil is expected to account for about 40 per cent of the company’s global revenue, or almost $290m.

Ferretti opened a huge $310m shipyard on the outskirts of Sao Paulo two months ago to meet the new demand. It’s expected to produce 120 yachts a year once it reaches capacity. In the past two years, more than a dozen high-end foreign boat makers have either built shipyards in Brazil or have entered into partnership with local dealers to export their wares to the market, despite tariffs of between 70 to 100 per cent on imported vessels.

Annual boat sales in Brazil have grown by 30 per cent since 2008, industry leaders said. Meanwhile, in the US and Europe, sales of high-end boats have dropped by 70 per cent.

Executives in Sao Paulo now earn more than their counterparts in New York, London, Hong Kong or Singapore, and their disposable income is flooding Brazil’s consumer market. When not spending at exclusive shopping centres, Brazilian executives can be seen cruising the seas near Santos, south of Sao Paulo, Brazil’s financial hub, and along the lush green coast north to Rio de Janeiro. The marinas that dot Brazil’s 4,600-mile coast are at capacity, and as soon as a vacancy opens, it is snapped up by a new boat owner.,,We were always told that Brazil was the ,,country of the future’ but we didn’t know when that would arrive,” said Ernani Paciornik, a Brazilian marine industry pioneer, who organises international boat shows across Brazil.,,I think the future has arrived.”

The ranks of the new rich are growing in other developing countries as well, especially the other members of the so-called Bric group – Russia, India and China. In China the number of millionaire households is set to rise by 91 per cent to 2.5 million by 2020, in Russia by 221 per cent to 1.2 million, and in India by 143 per cent to 694,600, according to the consulting firm Deloitte.”

So detached utopia for them and dystopia for the rest of the peasants, subject to ubiquitous surveillance, state repression and declining living standards, in deteriorating environments while the sea minders can pretend they owe their wealth to their individual genius and Galtian superiority.

As I have said before, welcome to the New Sociopathy. It will take more than Twitter to fight back effectively because one of the reasons for such social detachment is not simply living away from the riff-raff but also the fact that, at this point, these sea-minders are afraid as the Cloud Minders were and needed torture to control the miners.