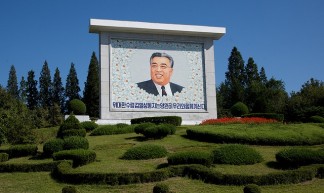 ANALYSE - Should Europe play a role in the Korean crisis, and if so: what role would that be?

From London or Brussels, the situation on the Korean Peninsula can appear – in the words of former British Prime Minister Neville Chamberlain – a “quarrel in a far-away country between people of whom we know nothing”. On one side, a mad dictator (you only have to look at his hairstyle) with nuclear weapons and long-range missiles of doubtful reliability; on the other side, the country of Gangnam Style and Samsung. The nuclear weapons cannot reach Europe. And the big global powers, the US and China, are already engaged. Europe could leave them to sort things out, at best playing the role of Greek chorus in support of US policy (as a Western ex-official described it recently).

But that would be a mistake. Seasoned Korea watchers say that the current crisis is as serious as they can recall. Against that background, as the US flies B2 bombers over South Korea and Japan deploys ships with anti-missile defences, one could ask, as Stalin did of the Pope, how many divisions the EU has. But while it may not have armies there, Europe has interests and assets in the region. It should think about how to protect the former and use the latter.

Europeans also have an interest in the global order which the Democratic People’s Republic of Korea (DPRK) threatens: the nuclear non-proliferation regime; norms on refraining from the threat or use of force in international relations; and respect for UN Security Council resolutions. The failure of global powers and institutions to stop North Korea becoming a de facto nuclear weapons state is already a bad precedent.

Finally, the crisis could have repercussions for transatlantic relations. Though there are American officials who think that greater European involvement in Asia would just complicate matters, there have also been calls from parts of the administration, including then-Defense Secretary Leon Panetta in January 2013, for increased European engagement there. If Europeans ignore these calls entirely, they risk strengthening the perception within Washington that the value of the transatlantic alliance is dwindling.

What more can Europe do? There are clear constraints; a diplomatic initiative cutting across the longstanding Six Party Talks process, for example, or any move to soften sanctions on North Korea without significant movement from Pyongyang, would be very unhelpful. But in the short term Europe can work for de-escalation. We do not know exactly what Pyongyang wants, but we can assume that the North Korean authorities are looking for concessions from the international community: aid, or a peace treaty with the US, for example. They need to hear a consistent message that this is the wrong way to set about things. The Europeans should signal strongly to Pyongyang that its aggressive stance will get it nowhere. Statements this week by Baroness Ashton, the EU High Representative, who called on North Korea to re-engage constructively with the international community, and by Anders Fogh Rasmussen, the NATO secretary general, whose message was “Stop what you are saying, stop what you are doing”, are a good start. The EU has already imposed wide-ranging sanctions on North Korea following its December 2012 ballistic missile launch and its February 2013 nuclear test. It should tell Pyongyang clearly that while it would rather reward genuine efforts to reduce tension, it will not hesitate (for example) to restrict the country’s access to foreign currency in response to further provocative acts.

Europeans should also intensify contacts with China and Russia – which cannot be suspected by North Korea of speaking on behalf of the US – and urge them to keep up their recent efforts to discourage North Korea’s aggressive posturing. President Xi Jinping’s remarks at the Boao Forum this month, in which he said “no one should be allowed to throw a region and even the whole world into chaos for selfish gains”, were evidently aimed at North Korea. China also seems to be making quiet moves to tighten implementation of the UN Security Council’s financial and trade sanctions against North Korea. The EU should let the Chinese know that it welcomes such steps.

If this becomes a shooting war, Europe’s practical role in Korea will be limited (though European forces may be called on to stand in for US forces in areas closer to home, and some allies may have niche capabilities to offer). But if, as most experts believe, the situation eventually calms down, in the longer term Europeans can help North Korea and the concerned powers to move forward by taking the initiative in four areas.

First, the EU should reinstate its formal political dialogue with the DPRK, postponed last November as tension around North Korea’s weapons programmes grew. The Union should also encourage the European Parliament to keep channels of communication open. The Parliament wants to maintain a firm line with North Korea but it has in the past had contacts with the DPRK’s Supreme People’s Assembly. Even if EU officials and MEPs are unlikely to get close to any of the real decision-makers in North Korea, such contacts would expose North Korean officials to European thinking and perhaps challenge their preconceptions about Western aims.

Second, the EU should support ‘track-two’ dialogues. Think-tanks and academic institutions in several European countries have acted as venues for discreet discussions between North Korean and Western experts and former officials. If the North wants to improve relations – an important caveat – then such fora could allow it to explore new approaches without commitment and without having to take public positions. A degree of official backing from European governments or the EU itself could help to convince the North Koreans that Europeans are also serious about helping to reduce regional tension and improve relations.

Third, the EU could strengthen people-to-people and cultural co-operation. The North Korean authorities do not make this easy, as the 2009 closure of the Goethe Institute reading room in Pyongyang showed. But there have been some successes, such as the visit of the Munich Chamber Orchestra in 2012 and the showing of ‘Bend it like Beckham’ on state television in 2010; and the British Council has a long-running programme of teaching English teachers in North Korea, using a UK-focused curriculum. Without exaggerating their impact, such connections could help to expose some North Koreans to the reality of life outside, and implicitly encourage them to draw a contrast with official propaganda about the West.

Finally, Europeans should support economic and business training. In the long run, nothing in North Korea can improve much without a radical change of economic course. Where is the DPRK going to find the people to lead and manage such a process? Inevitably, China will have the greatest part to play, given its proximity and its own history of economic transformation. But Europeans – and especially, perhaps, those from the former communist countries – should  offer their insights and expertise. According to Professor Susan Shirk of the University of California at San Diego, and a former senior State Department official, such low-key, non-political capacity building could strengthen the voices of economic rationality within the country.

What tools does Europe have? Europeans have political ties with all the players in the region. The EU has had a ‘strategic partnership’ with South Korea since 2010, and there are regular high-level contacts between Brussels and Seoul. The High Representative discussed the situation in the region with South Korean foreign minister Yun Byung-Se on April 8th. The EU has a wide-ranging political dialogue with Japan, from summit level downwards.

The Union also has a formal high-level dialogue with China on strategic and foreign policy issues. China is probably the only country with any significant degree of influence over North Korea. Beijing has hitherto prioritised stability in North Korea over everything else, worried by what might happen on the border if internal change led to disorder. The EU has stepped up its contacts with Beijing on North Korea, expressing appreciation for the recent steps the Chinese have taken (for example in co-sponsoring the latest package of UN Security Council sanctions after North Korea’s third nuclear test in February) and encouraging them to be firm with North Korea.

While the US, Japan and South Korea have no diplomatic relations with the DPRK, seven EU member-states – Bulgaria, the Czech Republic, Germany, Poland, Romania, Sweden and the UK, though not the EEAS – have embassies in Pyongyang, which provide a source of first-hand information and a channel for communication. The Swedish Embassy also represents US diplomatic interests in Pyongyang. There are occasional bilateral visits to Pyongyang from Europe, for example by a Dutch agricultural trade mission in 2012. The EU has a small programme of humanitarian assistance, focused on vulnerable groups in North Korea. Europeans have a history of quietly facilitating dialogue between North Korea and the outside world, including through business education.

The Korean Peninsula is far away, but we should not make the mistake of equating distance with lack of importance to Europe. Good or bad, what happens there will affect us. Even if their clout is relatively limited, Europeans should think creatively about how to nudge developments in the right direction.

Ian Bond is director of foreign policy at the Centre for European Reform.