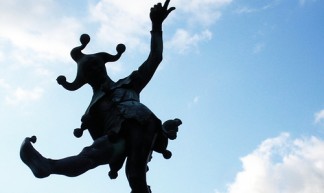 The Dutch political party PVV of its leader Geert Wilders has recently caused a lot of angry reactions by opening a new website where people can anonymously complain against Middle- and East-Europeans  for causing trouble of any kind. Opening  this website is surely an act of discrimination and it is a shame that even a party which, in a way, is a member of the Dutch government engages in such activities. Since the Dutch already have gained some experience with this kind of misbehaviour of the PVV, it might be very useful to give some advice to people from abroad about how to react to it in an appropriate way.

As a starting point, it is a widespread misunderstanding that Geert Wilders is smart. The truth is that he is not. Why else would he let his party open a witch hunt like the one on Middle- and East-Europeans many years after everybody else finally decided to end such nonsense? This is not smart but stupid. The smartness of Geert Wilders is nothing more than a kind of commercial disguise. To say it in other words, Geert Wilders is only as smart as his dyed hair is blond. In earlier centuries, every village had its village idiot and nowadays, the PVV continues this tradition on a national level. The abbreviation PVV is therefore somewhat misleading, PVI would be more appropriate.

It is strange and in a way even frightening that the PVV nevertheless gets  so much support in The Netherlands. Maybe the reason is that many people like laughing with village idiots , I don’t know. It should, however, be noted that this support might not last long. Since Dutch election results can vary very drastically, it might soon all be over. Many of the Dutch hope so. Its majority still dislikes the PVV and it often does so very strongly. One reason for that is that the PVV seems to enjoy bullying minorities. However, determining the adequate reaction, the important point is that the PVV uses angry reactions to its provocative behaviour also as part of its marketing strategy for maintaining popularity and until now, this unfortunately seems to work quite well. In order to change this, more and more of the Dutch no longer give the PVV publicity by neglecting its provocations and this seems to be the best approach.  After all, nobody blames a village idiot for saying stupid things.

Another important thing is that the PVV shows a remarkable divergence between how it thinks that it should be allowed to treat others and how it thinks that it should be treated itself. For example, the PVV strongly protests against being called an extreme right-wing party. I don’t know why, maybe because it’s true. Anyway, further discussion with the PVV about this or similar  topics is of course useless because serious discussions with village idiots is quite impossible. It might only lead to additional popularity of the PVV and nobody wants that.

Therefore, the advice from The Netherlands to the rest of the world about how to react to actions of the PVV can be very short and clear: Don’t. They are just fools.