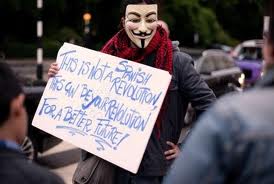 Your must-read of the day from one of the most important sociologists of social movements:

“Neoliberalism is a political doctrine that brings with it a minimalist vision of the public and democracy, as Colin Crouch demonstrates so well in his Post-Democracy. It envisages the reduction of political intervention to correcting the market (with consequent liberalisation, privatisation and deregulation), an elitist concept of citizen participation (electoral only, and therefore occasional and potentially distorted) and an increased influence of lobbies and powerful interests.

The evident crisis in this liberal concept and practice of democracy is however accompanied by the (re)emergence of diverse concepts and practices of democracy, elaborated and practiced, among others, by social movements. In today’s Europe, they are opposing a neoliberal solution to the financial crisis, accused of further depressing consumption and thereby quashing any prospect for growth – whether sustainable or not.

Austerity measures in Iceland, Ireland, Greece, Portugal and Spain have been met with long-lasting mass protests, which partly took the more traditional form of general strikes and trade union demonstrations, contesting the drastic cuts to social and labour rights.

But another type of protest has also emerged, not opposed to the former, but certainly different and more directly concerned with democracy: the criticism to democracy as it is now, and the elaboration of possible alternatives. “Democracia real ya!” was the main slogan of the Spanish indignados protesters that occupied the Placa del Sol in Madrid, the Placa de Catalunya in Barcelona and hundreds of squares in the rest of the country from 15 May 2011, calling for different social and economic policies and indeed greater citizen participation in their formulation and implementation. Before such a mobilisation in Spain, at the end of 2008 and start of 2009, self-convened citizens in Iceland had demanded the resignation of the government and its delegates in the Central Bank and in the financial authority. In Portugal, a demonstration arranged via facebook in March 2011 brought more than 200,000 young people to the streets. The indignados protests, in turn, inspired similar mobilisations in Greece, where opposition to austerity measures had already been expressed in occasionally violent forms.”

Which, of course all point to the much-debated crisis of legitimation:

“The indignados’ discourse on democracy is articulate and complex, taking up some of the principal criticisms of the ever-decreasing quality of representative democracies, but also some of the main proposals inspired by other democratic qualities beyond electoral representation. These proposals resonate with (more traditional) participatory visions, but also with new deliberative conceptions that underline the importance of creating multiple public spaces, egalitarian but plural.

Above all, they criticise the ever more evident shortcomings of representative democracies, mirroring a declining trust in the ability of parties to channel emerging demands in the political system. Beginning with Iceland, moving forcefully to Spain and Portugal, indignation is addressed towards corruption in the political class, seen in bribes (the dismissal of corrupt people from institutions is called for), as well as in the privileges granted to lobbies and in the close connection between public institutions and economic (and often financial) power. It is to this corruption – that is the corruption of democracy – that much of the responsibility for the economic crisis, and the inability to manage it, is attributed.”

Indeed, part of this crisis is the fact that the “there is no alternative” view has contaminated most mainstream left-wing party in Europe (the US democratic party is not left-wing, so, it was there all along, in a softer form than its Republican counterpart) and therefore, excluding extremist parties, there dominant parties have subscribed to the neoliberal view of minimalist democracy, so, they cannot be seen as offering an alternative to right-wing parties and their austerity programs and power-to-the-lobbies politics. After all, it is a socialist government that is implementing austerity in Greece.

This crisis of legitimation is also mixed with the alter-globalization meme against globalization from the top, through major transnational institutions such as the IMF or the World Bank and the World Trade Organization, summarized as the global democratic deficit.

So, according to Della Porta, what are the alternatives?

“But there is also another vision of democracy, the one which normative theory has recently defined as deliberative democracy, and which the global justice movement has elaborated and diffused through the social forums as consensus democracy. This conception of democracy is prefigured by the very same indignados that occupy city squares, transforming them into public spheres made up of ‘normal citizens’. It is an attempt to create high quality discursive democracy, recognising the equal rights of all (not only delegates and experts) to speak (and to be respected) in a public and plural space, open to discussion and deliberation on themes that range from conditions of distress to concrete solutions to specific problems, from proposals on common goods to the formation of collective solidarity and emerging identities.

This prefiguration of deliberative democracy follows a vision that is profoundly different from that which legitimates representative democracy, founded on the principle of majority decision making. Here, democratic quality is in fact measured in terms of the possibility of elaborating ideas within discursive, open and public arenas, where citizens play an active role in identifying problems, but also in elaborating possible solutions. It is the opposite of accepting a ‘democracy of the prince’, where the professionals elected to govern must on no account be disturbed, at least until fresh elections are held. But it is also the opposite of a ‘democracy of experts’, legitimised by output, on which European institutions have long relied.”

Yes, but let’s not forget that there is one major function that the state never gives up in its minimalist state: repression. So, any real challenge to the system will not be met with warm welcome and the propagandistic push-bakc will be massive (as it is in the UK after the riots) in order to generate a backlash against the movements.