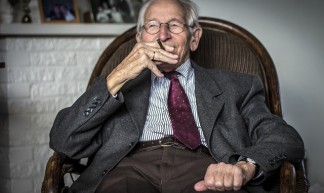 COLUMN - Last week on Facebook I saw this  Buzzfeed post go around: ‘Things you’ll regret when you’re old’. As I was reading it, I thought a young person must have written it. To my amazement, when I got a glimpse of the writer Mike Spohr, he didn’t seem that young at all. I guessed above forty, old enough to know what he wrote was a bunch of crap. Had he been collecting clichés amoung the youth?  Read my comments on all 37 items of the list I prefer to call:  ‘Things you THINK you’ll regret when old’.

1. Not traveling when you had the chance.

Traveling becomes infinitely harder the older you get, especially if you have a family and need to pay the way for three-plus people instead of just yourself.

Travelling is completely overrated. And wrong, because of environmental issues.

2. Not learning another language.

You’ll kick yourself when you realize you took three years of language in high school and remember none of it.

This one is sooo wasted on the Dutch.

3. Staying in a bad relationship.

No one who ever gets out of a bad relationship looks back without wishing they made the move sooner.

Which era does he have in mind? In view of divorce rates, the opposite is pretty obvious. People never stay in a relationship anymore. Let alone a BAD relationship. They certainly don’t need help there.

Wrinkles, moles, and skin cancer can largely be avoided if you protect yourself.

Has this come from a different list? Like a prospectus from the Association against Cancer? Have the two lists been mixed up?

5. Missing the chance to see your favorite musicians.

Facepalm dude. As you say.

6. Being scared to do things.
Looking back you’ll think, What was I so afraid of?

That’s an easy one: when you’re old, you will thank heaven on your bare knees you are still alive, whilst many of your reckless mates left their young lives going the rough track.

Too many of us spend the physical peak of our lives on the couch. When you hit 40, 50, 60, and beyond, you’ll dream of what you could have done.

You regret this now (but still never put yourself to doing it), and you’ll regret it every day till you’re old. Then you will not give a flying damn.

8. Letting yourself be defined by gender roles.

Few things are as sad as an old person saying, “Well, it just wasn’t done back then.”

What is he on?

9. Not quitting a terrible job.

You gotta pay the bills. But if you don’t make a plan to improve your situation, you might wake up one day having spent 40 years in hell.

Read my lips: you will absolutely regret having quit a perfectly fine employment out of sheer expectation something fantastic was waiting out there just for you to grab it.

10. Not trying harder in school.

It’s not just that your grades play a role in determining where you end up in life. Eventually you’ll realize how neat it was to get to spend all day learning, and wish you’d paid more attention.

Hell yeah, if you barely managed fifth grade. But if you studied till the age of 30 and graduated with honors in two majors, let me tell you: BOY WILL YOU REGRET THAT. A complete waste of your precious youth. You should have been dancing in the streets and having fun. Or have taken the first job you could lay your hands on and start making a living early in life, buy a house, things lots of people do with their modest salaries, and are settled much sooner than you were, being awfully poor till you hit 40.

Life is really, really short. Too short to be spent inside four walls cramming your brains with useless stuff.

11. Not realizing how beautiful you were.

Too many of us spend our youth unhappy with the way we look, but the reality is, that’s when we’re our most beautiful.

Fact: the great majority of us are indeed blazing beauties. Especially in the States.

When you’re old, you won’t care if your love wasn’t returned — only that you made it known how you felt.

When you’re old, you’ll look back on the many times you said I love you to complete morons with utmost shame.

13. Not listening to your parents’ advice.

You don’t want to hear it when you’re young, but the infuriating truth is that most of what your parents say about life is true.

Fact: the great majority of parents are complete idiots. Especially in the States.

You’ll be embarrassed about it, frankly.

15. Caring too much about what other people think.

In 20 years you won’t give a damn about any of those people you once worried so much about.

No you won’t, that much is true, but you won’t regret having done it neither. You just won’t give a damn, period.

16. Supporting others’ dreams over your own.

Supporting others is a beautiful thing, but not when it means you never get to shine.

Fact: the great majority of people’s dreams suck big time. So if you hang up with folk who do have realisable dreams, you will most certainly never regret having taken a ride on the wild side helping THEM.

17. Not moving on fast enough.

Old people look back at the long periods spent picking themselves off the ground as nothing but wasted time.

No they don’t. They never give it a second thought. They have other things to do: enjoying their present life for example, knowing it will all be over and done very soon.

18. Holding grudges, especially with those you love.

What’s the point of re-living the anger over and over?

You will certainly not long for the times you forgot how badly you were treated and went back for more.

19. Not standing up for yourself.

Old people don’t take shit from anyone. Neither should you.

Old people hold their tongue wisely when outnumbered, and only regret the times they didn’t.

OK, so you probably won’t regret not volunteering Hunger Games style, but nearing the end of one’s life without having helped to make the world a better place is a great source of sadness for many.

The Christian Youth Association speaking? My god, this is too easy.

Brush. Floss. Get regular checkups. It will all seem so maddeningly easy when you have dentures.

That kind of sounds like one of the few of these 37 warnings an elderly person genuinely could tell the young. Left unsaid the dramatic improvement in dental techniques, going exponential every year. Implants rock.

22. Missing the chance to ask your grandparents questions before they die.

Most of us realize too late what an awesome resource grandparents are. They can explain everything you’ll ever wonder about where you came from, but only if you ask them in time.

When you are, say, 30, a portion (say, 0,01%) of you could think that. But when you hit 60, it will not be any concern of yours, trust me. You’ll be too busy desperately trying to transfer some of your own memories unto the next generations. About which no one gives a fuck.

Could be. Could be that you got real depressed when you went into retirement, because you happened to really like your job and miss it like hell.

24. Not learning how to cook one awesome meal.

Knowing one drool-worthy meal will make all those dinner parties and celebrations that much more special.

25. Not stopping enough to appreciate the moment.

Young people are constantly on the go, but stopping to take it all in now and again is a good thing.

Well, I have to admit it, if not reluctantly, that Mike is right here. He has worked very hard to amount to this awesome truth. Carpe diem. Live every moment fully. That’s it. That’s the receipe folks. Forget about the 36 others.

26. Failing to finish what you start.

“I had big dreams of becoming a nurse. I even signed up for the classes, but then…”

Depends highly on what you start. If it’s crap you’ll regret having sticked to it. Like having had the big dream of becoming a nurse.

You will go to hundreds, if not thousands, of parties in your life. Wouldn’t it be cool to be the life of them all?

I will give 5 bucks to every reader who finds me an oldie who regrets that. I will.

28. Letting yourself be defined by cultural expectations.

People grow apart. Clinging to what was, instead of acknowledging that things have changed, can be a source of ongoing agitation and sadness.

This kind of interferes with 18.

30. Not playing with your kids enough.

When you’re old, you’ll realize your kid went from wanting to play with you to wanting you out of their room in the blink of an eye.

When you’re old, you’ll have exquisite grandchildren to dwell on to expurge your mistakes of the past and plenty of time on your hands on top of the bargain. You will be so blissfully thrilled that you’ll never take a minute to think about their boring parents.

Knowing that you took a leap of faith at least once — even if you fell flat on your face — will be a great comfort when you’re old.

32. Not taking the time to develop contacts and network.

Networking may seem like a bunch of crap when you’re young, but later on it becomes clear that it’s how so many jobs are won.

That’s a good one. I’ll have a rain check on that, and come back when I have asked a thousand oldies, see if I finally find one who can corroborate this assessment.

As Tom Petty sang, “Most things I worry about never happen anyway.”

*Yawn* Are we done already?

34. Getting caught up in needless drama.

At this point the writer was getting desperate.

35. Not spending enough time with loved ones.

Our time with our loved ones is finite. Make it count.

When you’re 20, hanging round with mates is about the only thing you do anyway, so no advice needed here. When you’re 60, you have plenty time to spend with loved ones. When you’re 30 with spouse and kids you haven’t. That’s a rule. Every 60-year old knows that.

36. Never performing in front of others.

This isn’t a regret for everyone, but many elderly people wish they knew — just once — what it was like to stand in front of a crowd and show off their talents.

Have I said something like *writer* and *desperate* earlier? If not, time to say it now.

37. Not being grateful sooner.

It can be hard to see in the beginning, but eventually it becomes clear that every moment on this earth — from the mundane to the amazing — is a gift that we’re all so incredibly lucky to share.

Okay, so we have to be grateful for life itself right? Sounds good to me. Because regretting not having been grateful to other people… Write me a post card when you will. Really looking forward to it.